The Legacy of Power Ranch

Turn of the Century Homestead

In 1892, James Oliver Power came to Arizona with his belongings in a tin trunk aboard a buckboard wagon that his family brought from Kansas.  He first settled in Lehi, a Mormon community near present-day Gilbert.  Here he met his bride, Sarah Loveda Bullock, at a church dance.  Sarah and her family had moved to the area from Blanchard, Iowa in Page County.  James and Sarah were married in 1900.

With the help of the Pima Indians, the early Lehi Pioneers (as the settlers were known) organized work parties and began digging irrigation ditches to bring in water from the Salt River Valley so they could plant crops.  With completion of the Roosevelt Dam in 1911, which provided abundant and steady irrigation, settlers flocked to the Gilbert area.

Young James and Sarah began their 2,000-acre Power Ranch homestead living in a tiny framed bungalow.  The five-room adobe house, with its 10-inch thick walls and screened porch in back, was where they raised their 13 children (including two sets of twins).  All of the children, except Lou, the youngest, were born at home with the older girls helping in delivery. 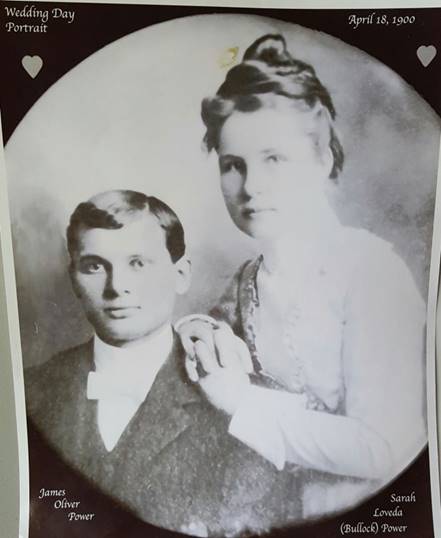 Without a doubt, cotton was king at Power Ranches.  In fact, James Power was known throughout the area as one of the best producers of pima cotton, named after Pima County, Arizona.  When the depression hit in 1929, the banks closed and everyone was broke.  Power Ranches couldn’t sell its cotton, so it diversified into all kinds of vegetables and hired a Japanese supervisor and Filipino crew from California.  Nevertheless, the ranch operation survived and was prospering again by 1934.

Following World War II, Power Ranches began running cattle and continued the operation until 1962.  At its peak, the cattle herd counted 600 heads.  If James Power put his strength and ingenuity into Power Ranches, then Sarah Power provided its heart and soul.  Indeed, it was Sarah who fashioned the family’s branding iron - the letter "W" beside the shape of a heart - saying "it takes a lot of work and a lot of love" to run a ranch.  It is a proud symbol of heritage that the family honors to this day.

During its peak production years of 1963 - 1979, Power Ranches employed as many as 500 people.  The variety of crops raised on the 2,000-acre spread included cotton, peaches, plums, grapes, nectarines, barley, wheat, sorghum and potatoes.  Typically, the Power Ranches cotton crops yielded five bales per acre, while the standard for the area was three and a half bales.  The Gilbert Cotton Gin had opened in downtown prior to 1920 to help farmers bale and ship their crops. 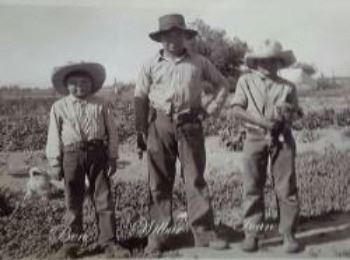 Behind the family home were tall, wide-spread cottonwood and eucalyptus trees that were "lifesavers" during the summer months.  They provided much-needed shade for the cattle and horses - and the family.

To survive the summer heat, the Power family slept outdoors as did other early residents of Gilbert.  Air conditioning and evaporative coolers did not exist; and since there were no paved roads to retain the heat, the desert evenings cooled off considerably after the sun went down.  At the Power home, father James rigged up a "misting system" by pumping water from the windmill to the top of the enormous cottonwood tree in back.  The mist filtered down through the branches and onto the sleeping family, in effect cooling the outside temperature by 30 degrees.

Other ways the Power family kept cool was hanging burlap soaked in water over the windows and they took a 10-gallon barrel, filled with ice, to the fields and constantly dipped their straw hats in water.  A light summer meal consisted of bread and a glass of cold milk.  Of course, swimming in the canal shaded by a row of lush cottonwood trees was a favorite pastime, particularly for the Power boys.

During these times, horses and mules not only were vital to the ranch operation, but also were the cheapest and easiest mode of transportation.  Mother Sarah stood shoulder-high to the family’s draft team, Dick and Dan.  The children were so dwarfed by the animals that they used to sit on the Clydesdales’ hooves as they walked around.  To ride the draft horses, the youngsters either sat cross-legged on their backs or straddled their necks.  They would also hook the team up to the buckboard and drive into Gilbert to buy items for Mother at Liberty Market.

The Power kids rode their mules 3-1/2 miles one-way to elementary school in nearby Queen Creek.  They also explored the Superstition Mountains by horseback and discovered a mountain lion, bobcat and a band of wild horses while riding in the San Tan Mountains.  Among the Power girls, Vera in particular was an accomplished rider who later joined the equestrian team at the University of Arizona in Tucson.

Family trips provided special fun.  During outings to four-block-long Mesa, the children liked to watch westerns at The Nile movie theatre.  Longer trips to Phoenix meant shopping at JCPenney, shows at The Orpheum and visits to the popular Adams Hotel at Central and Adams Street. 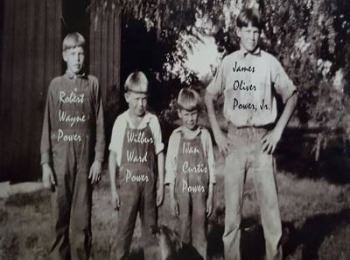 While a student, James became a member of Tempe Normal’s first football team, organized by Fred "Cap" Irish (Irish Hall) in 1896.  At the time, 61 male students were enrolled and none had ever played football.  Using the old flying wedge, Cap’s teams didn’t have helmets or pads and prior to each game, the field was plowed to cushion the falls.  Then known as the Bulldogs, Tempe Normal beat the University of Arizona 11 - 2 winning the Arizona championship in 1899.

Most of the Power children received a college education, with the girls becoming teachers.  In those days, rules for women teachers included dismissal if they married during the school year.

The heritage of the Power family still resides in the land they have entrusted to the developers of Power Ranch.  Young James and Sarah Power homesteaded their ranch more than a century ago with dreams, determination and a wagonload of fortitude.  As they tilled the soil and raised a family, the pioneer couple instilled in this place a sense of responsibility, neighborliness and family values that is the legacy of Power Ranch today.